A set I’ve wanted for quite a while, yet never made it to the final checkout with one of my online orders (that old budget thing and other sets always being a higher priority) is Emma’s Art Café (41336). Luckily a big supermarket chain had a promo pre-Christmas where you could collect rebate stamps with every purchase and got discounted LEGO sets in return. With the discounted prices matching the then best online pricing and the number of stamps required for eligibility being reasonably low it wasn’t much of a stretch to collect them on the weekly grocery shopping.

As I said, the price clocking in at around 22 Euros is very much okay and you can get the set for something along those lines at many online outlets and might even find it in a local store not costing much more. I wouldn’t expect it to go much lower than that, though, since it contains a lot of large parts that simply tend to be more pricey. On the other hand the original 32 Euros MSRP feel like a bit of a stretch.

The point here is that I genuinely wanted the set for its parts, but ultimately if you’re not the person to build stuff with those extremely colorful pieces it is of limited use. That and some parts like the Medium Lavender bricks with the rounded edge are simply not easy to integrate in many builds, regardless of what color they are, due to the limitations they impose.

What makes the set so nice is that it actually represents at least an attempt to capture the real structure and appearance of a small pavilion/ bungalow style café constructed from light materials as you can often find them in recreational facilities and parks, most of the time of course only open during summer/ holiday season. This is not least achieved by including some useful exterior details thanks to some generous space being provided on a large 16 x 16 plate plus some smaller plates as appendages/ extensions.

This is nicely illustrated by the small extra corner on the hinge or the cobble stone pavement being hinted at in front of the corner door. as can also be seen the set is relatively rich with vegetation, which when used right can enliven a scene considerably and set the mood (unlike with the many faux trees in Friends sets that often are just a sad excuse). Point in case: You’d feel welcome in such a nicely decorated restaurant or café. 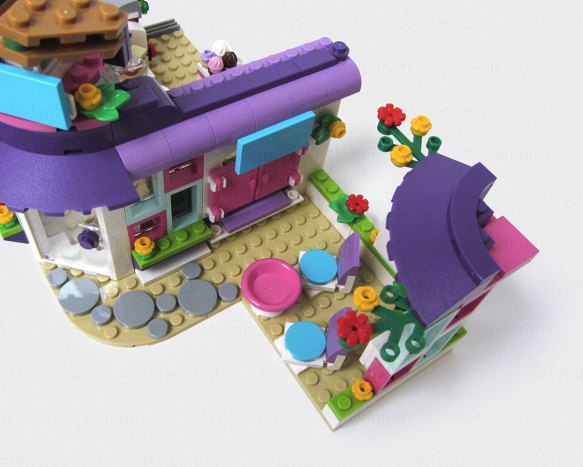 The artsy aspect is mostly carried home by the arrangements with the colored windows, which gives everything a vibe of this being a kind of club where people meet to discuss art, attend exhibitions and watch performances. I never use them, but the irony here is that applying the stickers would more or less ruin that atmosphere, as they look a bit too childish to be taken as serious art. In my view it would have been sufficient to just substitute the white tiles used to represent the image canvases with something colorful and it would have worked just the same.

Of course they would have had to think of something different for the large panel then, too. Naturally it looks a bit barren with nothing on it and one might need to replace the entire wall to create something interesting without those little adhesive buggers. This applies to the inside just as well.

While at it, I would likely also do something about the color scheme. It kinda bothers me that the Dark Pink is used so extensively. It really should have been reserved for the colored window frames. Most annoyingly even the window blinds are in that color. why can’t LEGO just be nice to us and produce them in a color that would look fine on a regular building as well like Dark Red, Dark Green, Dark Blue or one of the browns. *sigh*

The interior as such is functional, but not much beyond that. It feels like a lot of space has been wasted and the details could have been more refined plus there should be more of them. This should feel a lot more busy and to me it looks like the space is there for a second table or some stools on a longer counter. You should definitely consider pimping this set and rearranging the furniture, in a manner of speaking, should you keep this set around more permanently. 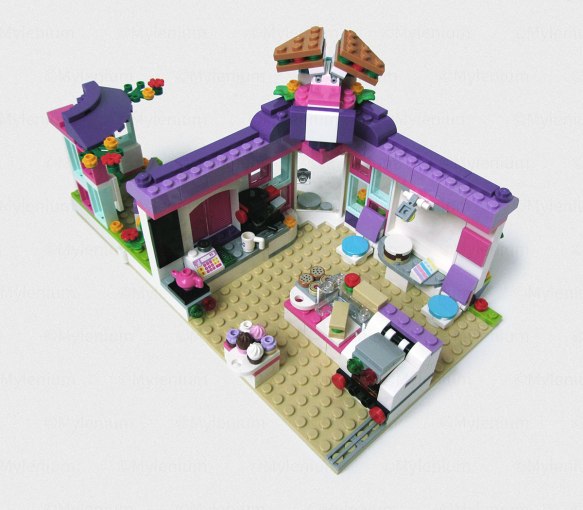 For me it was once more first and foremost a simple way to get some parts in interesting colors that are hard to come by otherwise. If you need some ideas: Those Dark Pink and Light Aqua window frames would look pretty gorgeous on a building in one of the dark colors, weird as it may sound. Yes, Black and Pink go well together as not only Lucy shows in The LEGO Movie(s). And those wedge plates for the sandwich pieces in Medium Dark Flesh are just sexy. They should be super useful on buildings with visible “wood” structures and similar things. Conversely, one can never have enough large plates in Tan.

So at the right price this is quite a well of pieces – within the limitations of any Friends set, that is. That being the case, it’s also one of the better, more useful sets in this series that would be easy to expand and improve upon, most simply by buying a second set and cannibalizing the pieces. Due to the large plate it’s reasonably stable and therefore should also be easy to handle by your little ones and offer a decent play value. As a bonus, this is also one of the few sets that actually has a male mini doll included and one of your girl gang can actually have a boyfriend (though given the terrible overall boys to girls ratio in this series, not every one of them will get a guy most likely…).

The big caveat is that despite my having built it now and being aware of its positives, oddly enough I still don’t consider it a high priority item. The things it does it does very well, but it’s overall a pretty mundane model and I guess I didn’t have that “Wow!” moment when you discover an original building technique or solution you may not have thought of yourself. Or in other words: It’s perhaps a bit too simplistic to tickle your adult nerves. So if you feel like it, pick it up, but otherwise you’re not missing much and can skip it. No big revelations of any kind in this set, just solid, if a tad boring conventional LEGO.