Blue Ocean really caught me on the wrong foot. Just when I was ready to ditch the LEGO City magazine for good, they start bundling them up with interesting extras that I can’t resist. So here we are again with the October 2022 issue and a very positive surprise.

First things first, though. The comic is what it is – it’s certainly the most interesting across al those magazines in terms of how the visual style has evolved, but the stories really are for the 5+ generation and the flat jokes and repetitions just don’t land with me.

The safety and security transgressions in this issue alone would make any building site’s supervisor hair stand on end. I also don’t quite get why we still have to put up with American style hard hats in for a European magazine. It seems like LEGO really need to fix this and create a new mold. It just seems weird, especially when they appear in mass like here.

The posters are okay and at least have a sense of visual clarity and communicating their intent, not just being lumped together excuses. The frontal lighting on the one with the steamroller is a bit odd, though. Like they shot it in a studio and not on a construction site. 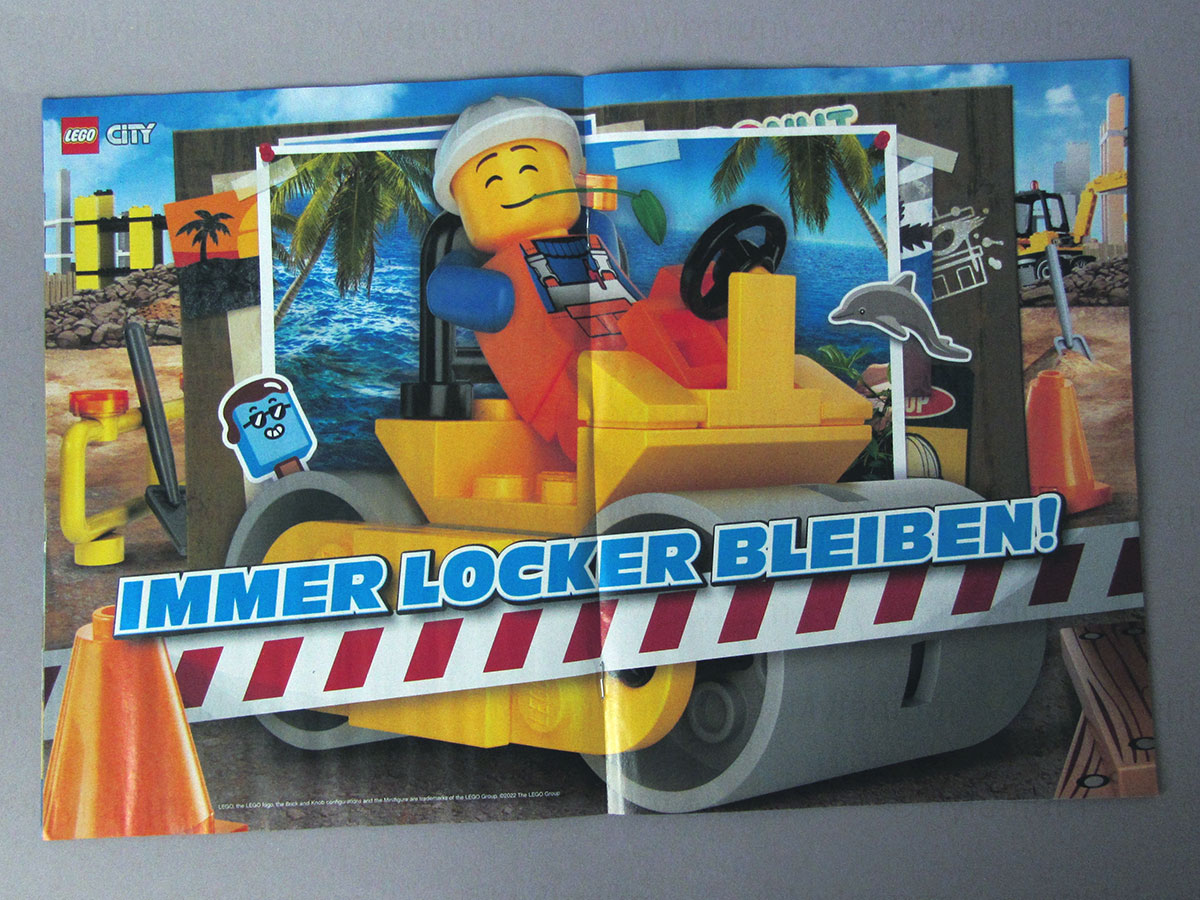 Now for the goodie, the steamroller itself in miniature form. I so friggin’ love it! When I saw it on last month’s preview page I had to giggle. This is just cool. It makes good use of the 3 x 3 cylinder piece that came out last year and even better, you get four of them without having to buy e.g. a Star Wars X-Wing or similar where they are used as part of jet engine exhausts or intakes. That alone is some decent value and overall the vehicle just looks cute and believable. If they had thrown in some of these discs to cover the ends it would have been perfect. I guess they just didn’t want to go through the trouble, as it would also have required 7L axles and some extra 2 x 2 plates to offset the side skirts holding them. Anyway, it’s still pretty good even without that. I just had so much fun crunching up some cookie crumbs on the coffee table! 🙂

Of course this edition wouldn’t be much without the extra and it’s the major selling point. If I as an old guy can have fun with it, then your kids can definitely have it, too. I seriously recommend this issue for that reason alone.