It’s that time of the year where we’re making giant leaps towards Christmas and inevitably this has been a recurring subject in the LEGO Friends magazine just as well. Sometimes with Christmas trees, sometimes with fun in the snow and more often than not with baking activities. This year we’re once more going down that route. 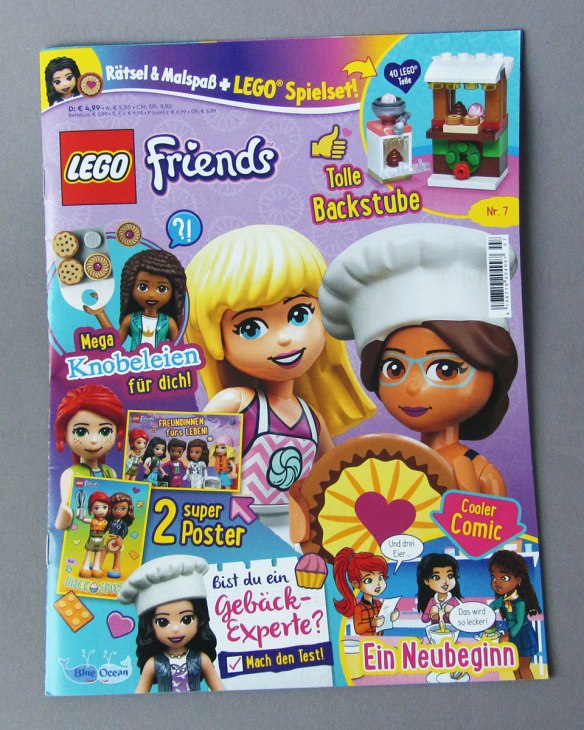 Interestingly, the comic doesn’t delve too deep into this and after a short introduction with the girls baking cookies it’s off to some winter-ly outdoor activities.

The baking theme is taken up again on a coloring two spread, but strangely enough they’re suddenly making pizza. This feels a bit like they’re recycling a drawing that was originally intended for a different issue. There’s a second coloring page with a Mandala-like round design.

The poster is the same boring stuff we’ve gotten a million times already, but maybe there’s hope for next year when the revitalized and redesigned characters make an appearance and we get more diverse characters overall.

The extra is a small cookie selling stand with an oven next to it. It’s serviceable, but really a bit underwhelming and too unspectacular. throwing in a bit more stuff wouldn’t have hurt.

This issue isn’t much to write home about and it’s “just okay”. Definitely not the special celebratory edition one would have hoped for and way too early to count for the holiday season. Thanks to the coloring sections it will keep your kids busy for a little while, though.

This site uses Akismet to reduce spam. Learn how your comment data is processed.