The predictable alternating cycle of Police – Fire Patrol – Some other current theme continues in this month’s LEGO City magazine (March edition) and guess what – we’re on step two of the loop, meaning that we get another firefighter. 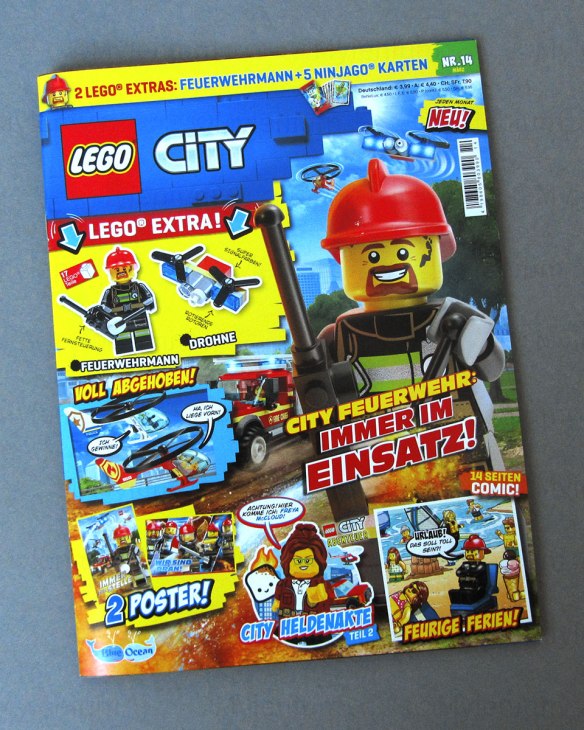 It’s getting harder to muster up some enthusiasm, but on the bright side you could technically now have four different such figures from the last 1.5 years without having ever bought an actual set. Good for people who want to bolster their squad, kind of bad for LEGO when users can’t be bothered to purchase boxed sets and just wait it out with the magazines. I don’t have much interest in either and solely obsess about the actual buildable pieces, but that’s not getting much better, either. The drone build in this one is again pretty barebones and wouldn’t justify purchasing the mag more than once. The rest of the content is okay with two comics and a bunch of simple puzzles.

In other news I’ve joined a small LEGO Magazines group on Facebook, in case you’re interested. It’s also permanently linked from the sidebar on the right. I’ve already always posted my articles to my own news feed and now also include them there, so it should be a bit easier for you to keep up. That’s even more so as from what I’ve seen so far the German versions always seem to be among the front runners. Sometimes the same issue is published months later in other countries. Having some advance information might help you make a decision further down the line. I’ll try to keep my schedule of firing out my little reviews pretty close to the release date as much as I can, so perhaps check back regularly…

It’s that time of the year where there’s all those fancy toy trade shows, first in London, currently in Nuremberg and soon in Tokyo, and of course that’s ample opportunity for LEGO to give some new products a grand roll-out and drip-feed embargoed info to journalists and dealers on others.

LEGO Dots is in the first category and after lots guessing we now finally know what it is. Yes, comparisons to Clikits from fifteen years ago feel appropriate and that’s where I have a problem. Seeing that that other product didn’t last long and barely made an impression on anyone, I’m willing to bet that this will be history repeating itself and two years down the line it will more or less quietly disappear again. There are a few things that rub me the wrong way.

First, with this stuff LEGO more or less are competing with hundreds of similar products in what I like to call “trashy kids craft”. You know, things like Aquabeads, whatever is the latest variation on self-adhesive rhinestones or the long-forgotten loom silicone rings. There’s a new hot thing every half year and the shortness of the hype cycles is only outdone by songs on the radio. To me it just doesn’t feel like that this is a market they should even be in. It just isn’t very exclusive or high-profile, things which LEGO otherwise keeps touting.

Second, and perhaps an even bigger problem, is that the concept will likely wear out quickly. The number of patterns you can produce with a given number of pieces is ultimately finite. Well, technically it isn’t, but I don’t imagine the kids this is targeted at to go out of their way to go too crazy on this and change their bracelets, pen holders and so on every day, especially with something as finicky as those tiny 1×1 tiles. It gets tedious rather quickly.

Third, for me as a MOC builder having some of those elements in new colors is a nice thing and I’ll definitely buy a couple of sets for my parts stock, but how far can you take that? After a short while you’ll have so much of this stuff floating around, you just don’t know what to do with those buckets of pizza-corner tiles in colors you’ll never use. You may not even be able to sell them with profit because everyone will suffer the same issue. On the bright side of course this means that we likely won’t have to worry about supplies for the next decade.

As it stands, to me this seems a weird move, after all. I had a gut feeling right from the start that LEGO Dots might be a product of limited relevance to me, but somehow they managed to disappoint even my low expectations. I’ll take the pieces for what they are worth, yes, but overall my feeling remains that LEGO should better invest in other things than trying to come up with such ephemeral products just to cash in on an artificially created short-lived hype bubble…

Going from not so exciting to pretty much *meh* the February issue of the LEGO Star Wars magazine has arrived.

This feeling of dissatisfaction of course primarily stems from the rather inglorious model included this time, the value of which to me hovers somewhere around the zero mark. Don’t get me wrong, there have been simplistic models in the past, but at least they always contained some interesting and unique parts or at least ones in interesting “rare” or new colors. This TIE Striker is really as mundane as it gets and has been trimmed down extremely to the point of barely being recognizable. Ironically it would have been easy to fix/ improve the whole affair by using larger wedge plates for the wings/ radiator surfaces and bulking up the fuselage ever so slightly with some more plates.

The comic has some nice panels featuring Yoda that would make for great posters, but no such luck. Instead we’re treated to the usual poor CG stuff this time featuring Vader and Luke. the activities department is sparse, to say the least with only three simple games/ puzzles. On the bright side, the price has been corrected down back to 3.99 Euro, but you just feel that there are fewer pages. Also the next issue is looking a lot more attractive judging from the preview page, so there’s hope yet…

Guess what? It’s January and Jack is back! Not that that’s a good thing and yes, before you ask, he’s also going to feature on the cover of the next issue according to the preview page. I’m really stumped by the unimaginativeness of the LEGO Hidden Side magazine designers in that regard.

The minifigure this time features El Fuego, which is sort of a good thing for me because it’s not redundant. I never could get myself to buy the Stunt Truck set (70421), at least not yet, so this is an easy way of getting the dude. Especially the helmet with the bullseye markings is a fun little addition that could be useful even if it’s only put up somewhere as decoration e.g. in a garage scene.

What I don’t get with these LEGO magazines are the CG-based posters. I mean this issue has several comic panels almost covering a full page and any of them would have made for a gorgeous poster. This seems such a waste, even more so since it’s apparent that some artists have been working hard for the past years creating all the graphics for Hidden Side. In my opinion this would have much more value instead of LEGO trying to force force the AR gimmick down everyone’s throat and thus every set and magazine being demoted to being just a tie-in to some ill-conceived bigger plan.

The activities section is adequate for the targeted slightly older kids and will keep them occupied for ten minutes, but on the whole the magazine feels terribly lightweight. I’ll keep on it for a few more issues, but if it doesn’t improve notably I think I’ll ditch it in the long run.

After last month’s brief intermezzo with some wood chopping it’s now back to police work (and next month firefighting) in the LEGO City magazine.

With the buildable parts once more we’re getting a superbike body. Thanks to this magazine and a Ninjago set I bought once I now have them in Black, Red and White. This almost makes me want to sit down and design some custom prints/ stickers, as sadly just like the pizza delivery version this is just unprinted. On such a large surface area it simply looks very plain and boring. If I ever were to e.g. build a motorcycle shop I’d definitely do something about this to make them look more attractive and even just a police patrol roaming the streets would benefit from some markings.

The rest of the magazine is just the usual stuff, though I was surprised to find a coloring picture on one page. Are we perhaps seeing a new trend, given that this was also the case in Friends recently? On a side note, the mag nicely illustrates why having named characters is not a good idea in the LEGO world. Duke DeTain? My ass! This kind of word play simply isn’t flying in German and the gag will be lost on many…

The Christmas craze is now behind us and I hope everyone gut through it well enough, but of course the world doesn’t stand still and as hinted last time, we’re getting another baking-themed LEGO Friends magazine for January. 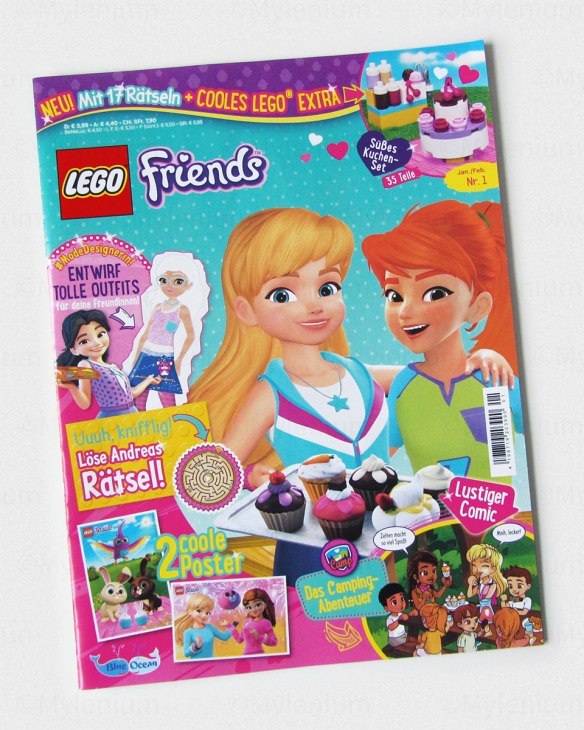 The cake-centric topic is interesting not just interesting as a seasonal residual but of course also because there’s going to be at least one such themed commercial set, The Big Bake Show (41393). If you’ve been paying attention, i.e. actually buying these last two issues, you already have some extra pieces to deck out this scenario further.

Admittedly the buildable pieces in this set aren’t that special – a bunch of “squeeze bottles” for colored frosting, a small spoon, an egg beater and some decorative elements on a two-tiered cake, but where it gets interesting, and to me this was quite a pleasant surprise, are the little flower elements which for the first time ever are now available in Bright Pink.

Yupp, with years of Friends sets already one would think they are commonplace by now like their Dark Pink counterparts, but just the opposite is true: They have never been done thus far. Not only will this be super useful for this cake & cookie stuff, but also for real flower bushes and fancying up gingerbread houses, if you get my drift. One can only hope that they will become more widely available in foreseeable time.

The rest of the magazine is also surprisingly rich with some decent puzzles, a few coloring pictures and an acceptable comic. Even the poster with the two bunnies looks okay (the other not so much). Overall one of the better issues I’ve seen…

Just in case you keep track of these things: I just updated my personal wishlist page. I removed a few sets that are definitely going to retire and added the new ones as far as they are known. However, I also kept on a few “oldie, but goodie” sets that I wouldn’t mind to get regardless of circumstances, be that just as parts sources or genuinely expensive and coveted sets that I never was able to afford or just missed somehow. in any case, checking this list might give you some ideas on what set reviews may be coming one of these days, of course along with some other good stuff that I hope to produce. With that a “Happy New Year!” to everyone and a good start in 2020!