With Halloween imminent, I figured it might be a good idea to focus on reviewing some spooky-themed sets by ways of being built around graveyards – or sections of them at least. This includes the Graveyard Mystery (70420) from Hidden Side and The Rise of Voldemort (75965) from the Harry Potter line of LEGO sets. 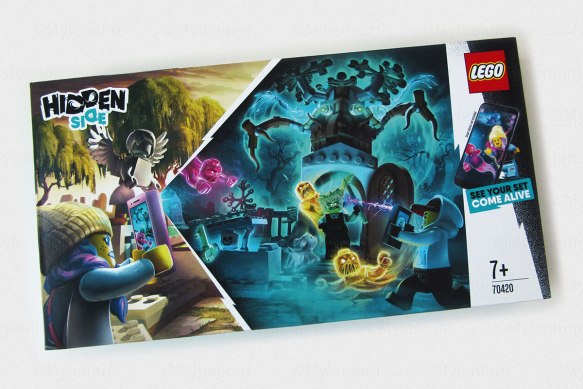 As you know, I’m quite a fan of Hidden Side – the sets are done well enough and to boot also very affordable because LEGO are pushing them so aggressively and there are discounts at every corner. This makes it easy enough to add them to the menu even if you are on a budget. The Graveyard Mystery can be had for as little as 20 Euro, which to me seems just about the right price. The full 30 Euro feels a bit out of proportion for what amounts to a rather slim model, on the other hand, and I’m not sure if I had picked it up then. 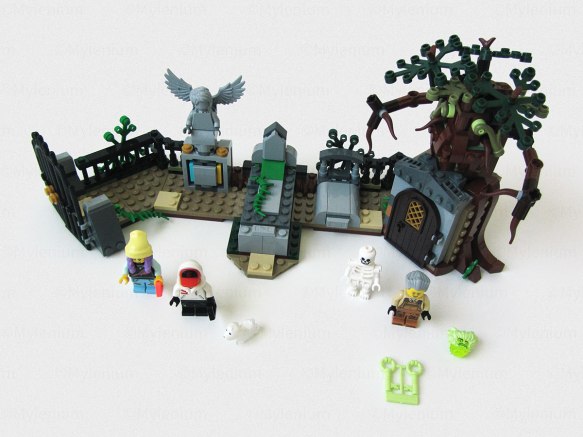 The set comes with the standard Parker and Jack figures along with Spencer, the ghostly dog. On the other side of the spectrum there’s a skeleton and the groundskeeper/ gardener, the latter of which is essentially the only really interesting bit in that department as with his overalls and all he could also be interesting for other uses e.g. in a City play scene.

Being designed with the Augmented Reality app intended to be used with these sets in mind, the graveyard/ cemetery is kind of a panoramic arrangement, so that most parts are visible all the time and the camera can capture the entire scene. The layout in and of itself however is more or less a towel strip walkway with a linear progression. You enter through the gate, pass by a bunch of graves and then arrive at the angry tree with the keeper’s little storage shed underneath.

Since I don’t have the app, I can’t enlighten you about the specific meanings of the colors in the game, but there sure are a lot once you open up the respective areas and expose the insides and undersides of some elements. In fact I believe even the big green slope on the central grave may have some bearing even with the lids still down. The problem is of course that without the fancies of a mobile device the play options are ultimately limited. You can barely hide a minifigure in the central grave and even placing someone inside the little shed is finnicky. Doing a hide & seek  and guessing in which grave someone is hiding would not pose much of a challenge.

A stand-out piece is naturally the angry tree with its “face” and “arms” being clearly recognizable. From what I’ve seen of the game it doesn’t seem to do much, though, and is merely whipping around. That is presumably not really useful. the same could be said for the mechanism on the real model in a sense. While I can appreciate the facial expression changing and the arms going up it still feels gimmicky. This is once more a case where a static, more detailed and more refined tree would have been preferable over such a very limited action feature IMO. 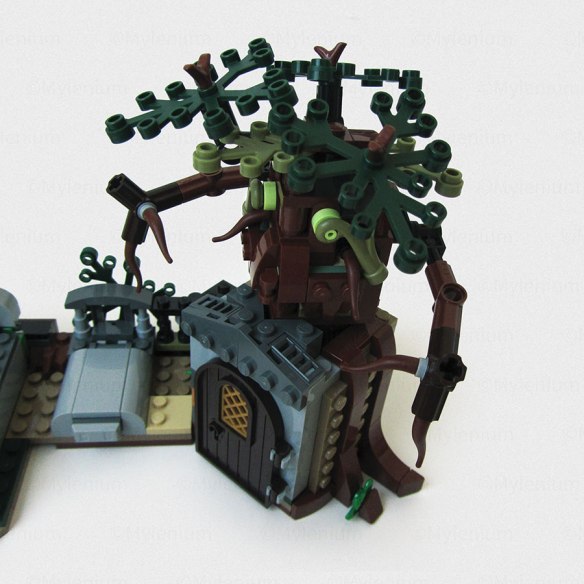 On the bright side, the set is full of pieces in very usable “natural” colors ranging from the various browns and grays to Olive Green. Nice to see that LEGO still can do such sensible stuff without them going bonkers or some higher-up instructing a designer to include bricks in crazy colors only to clear out the left-overs from previous production runs of other sets. There are no particularly unique or rare parts in this set, however. Thus there would be little point in getting this set for anything but buildings or indeed landscaping and cemetery building. 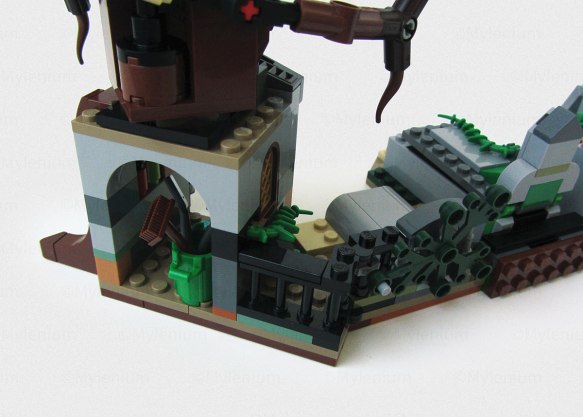 A small shortcoming, if you want to call it that, is the unattractive back side. Even with the emphasis on the panoramic effect it wouldn’t have hurt to have a few details here or at least the floor plates extend beyond the graves’ rear edges. To me it really feels like they chopped it off a bit too harshly. 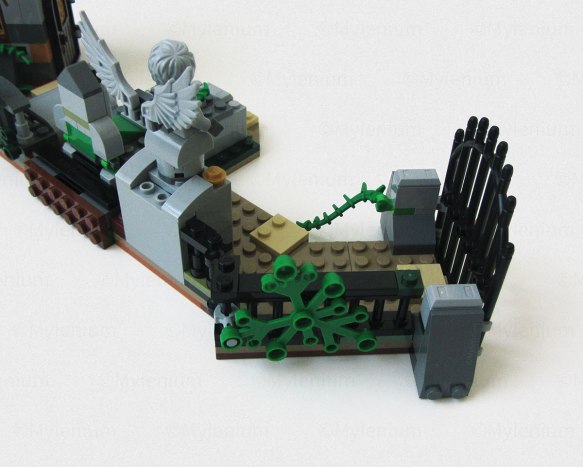 After my experiences with the Hidden Side side I kept having this weird idea running in my head that perhaps one day I might want to build a larger custom graveyard, perhaps with a small chapel and crypt, so naturally I stumbled upon The Rise of Voldemort from the Harry Potter movies. 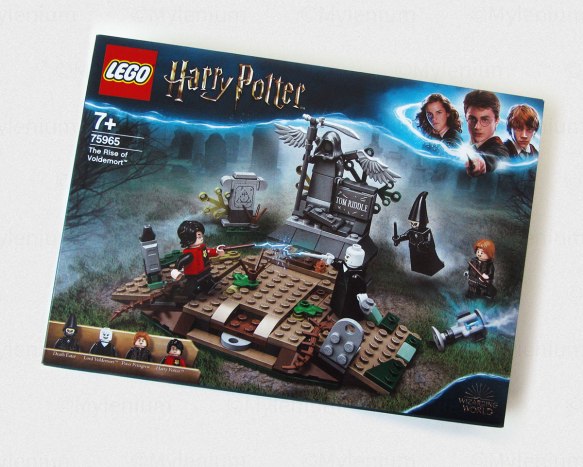 The point is not so much that I would be a particular fan of the series – quite opposite, as now 15 years later I look at these films and wonder how I could ever have been so foolish to buy the DVDs – but regardless, they are not without merit in terms of production design and at least some of the less WTF?-ish story elements. I know, I seriously need to read the books one day for a fair comparison.

Anyway, on of the key things that also made me consider this set is that when doing churches, graveyards and similar you have a need for some specific extras, that being large numbers of grey minifigure elements and decorative bits and bobs for the slabs/ grave stones. Lo and behold, this set comes with a fully formed angelic figure in Dark Bluish Grey, which of course is twisted into representing the Grim Reaper and there’s also a frog in that same color.

What also made the decision to buy this set easier is the consistent color usage compared to the first set. This means that you can easily mix & match and expand the ground thanks to the Dark Tan being used in conjunction with the same contrast colors for other elements. Or in simple words: You can buy multiple sets of both models and need not worry that intermingling parts would result in odd color combinations. 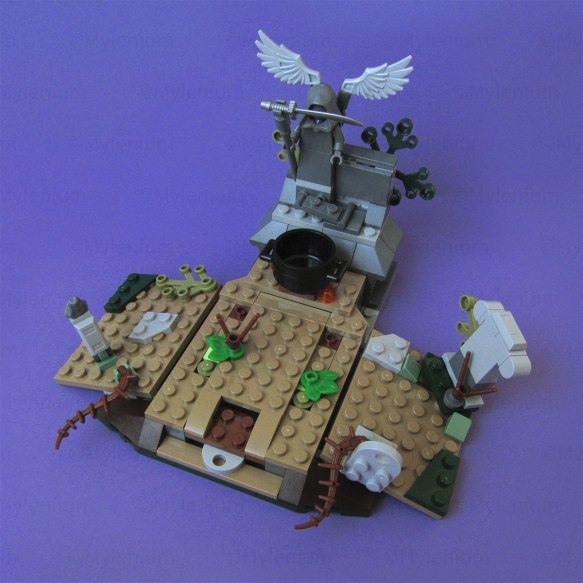 The set represents that scene where Harry Potter gets accidentally transported to an alternate place during the Trimagic Tournament in The Goblet of Fire, to witness the resurrection of He who must not be named, so there are all the figures relevant present. Personally I don’t care that much for them and for my taste in the context of the set there are simply way too many minifigures. In a sense it feels overcrowded due to the smallness of the available play are vs. the number of figures. That’s in my view also the biggest shortcoming of this set.

One of the side-effects of this lack of space is that it doesn’t really capture the mood of the scene. There is no sense of dread and feeling lost because everything is crammed together. This also isn’t helped by the simple construction with only a central part in the middle and the small side extensions clipped on with hinges. This inevitably limits the options for disguising some gaps and open areas, which painfully becomes obvious with the insides of the grave. It just looks extremely shallow and indeed a figure doesn’t even fit into it without the lid remaining ajar. 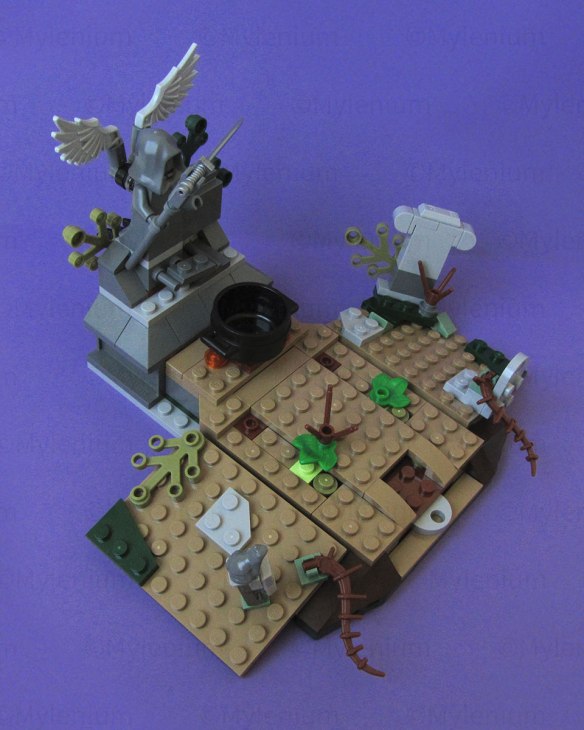 At the end of the day both sets have their flaws and issues, with the Hidden Side Graveyard Mystery at least offering a better value for money, however, due to being larger to begin with. I guess the ultimate test would really come once you actually start combining things, possibly based on multiple such sets, to build a more elaborate cemetery. The irony is of course once more that basically all the ingredients are already there, but LEGO trimmed away to many things in the interest of being “economical” to make either of the sets genuinely great. As a consolation, both sets are very affordable at least, so it would not be impossible to grab a bunch of them and make your dream project a reality, assuming you, too, have a thing for graveyards…