Being a lover of oceanic sea life, LEGO sets themed around this subject are of course high on my list even if they are only tangentially related. That’s why the Funny Octopus Ride (41373) from this years alternate-ish boardwalk fun park series in LEGO Friends ended up on my table.

To get the obvious out of the way before digging into the details, given the title I chose: No, this set isn’t good. So many things with it are so wrong in so many ways, that I’m going to sound like a negative Nancy all throughout this article. Of course it’s up to you to make up your own mind and draw your own conclusions, but perhaps consider this a sincere warning about what you may get yourself and your kids into. 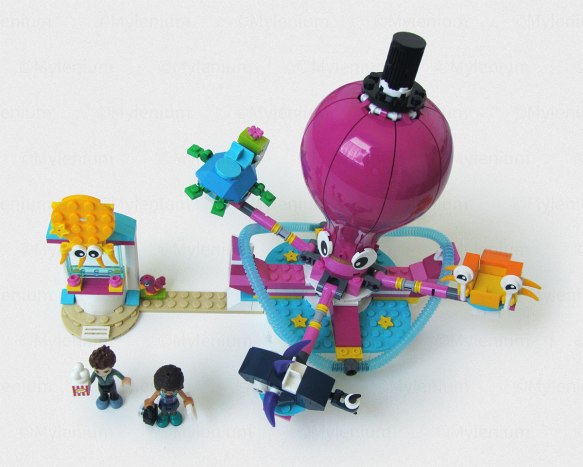 I myself had been pondering whether to get this set on and off so many times. The pro argument to pursue a purchase was of course once again my desire to get some good parts for my stock and funny enough the set delivers on that front. there are a number of unique parts in the form of re-colored elements that didn’t exist before, there’s a lot of Dark Pink elements, some of which like the smooth pin connectors are also a first and of course then there’s the balloon shells which I wanted to add to my collection, being that I didn’t have one of the older Friends or Elves sets they were featured in in the past. I have vague plans for a model in my head that I might actually need them one day.

It also so happens that quite incidentally the set also contains the exact four rounded plates in White that I might need to rebuild the smaller promotional Gingerbread House (40139) from 2015. With the official Winter Village Gingerbread House (10267) available and me indeed considering buying it eventually, this seems almost inevitable. I also like the transparent tubes. They could be a great way of decking out a better Hidden Side ghost lab or something like that. And finally there’s that printed 1 x 1 popcorn brick. I never bought the small Popcorn Cart (30364) polybag even when I had a chance, so it’s good to catch up on that, too. 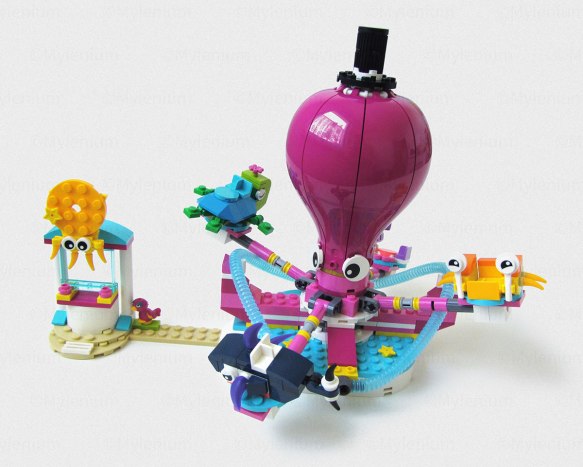 The actual construction of the model is super simple and ultimately that’s the biggest failure of the set. It’s really not pretty to look at and as someone who started out with Technic and through his 3D work has a working understanding of some of the finer points of mechanical engineering (at least that’s what I like to think) it just feels wrong, wrong, wrong. Sure, it’s for kids and the build needs to be straightforward and easy, but it still doesn’t make a lick of sense.

Point in case: Someone forgot that there is this little thing called friction and ultimately the whole “system” (in the physical/ engineering sense) is totally bogged down by it. No, unfortunately it’s not as easy as turning the knob at the top of the octopus’ mantle. I as an adult struggle to overcome the initial “stickiness” (static friction), my mom can’t do it easily and I don’t even want to imagine how a first grade school kid will have to make quite an effort to even get this going.

There are two main issues here: First there’s the Technic elements used on the arms themselves and by extension the internal axis inside and turntable below the balloon-y body. It’s all a case of the overall forces becoming to strong no matter how much you wiggle the bushes around to loosen up the connections and reduce tension just like there is no good way of dealing with a 10 units and 12 units long axle plugged together and sticking them into stacks of axle holes at the top and bottom. This, BTW, is yet another exercise that requires so much force that it may be beyond a kid’s capabilities. There’s just no way to get this perfectly balanced so everything moves lightly and without getting stuck.

The second and by far just as critical an issue is of course the corrugated hoses vs. the arms themselves. If you think about it for a second, what you are creating here is a ratcheted mechanism with four (!) “teeth” burrowing themselves in the crevices of the hoses. Even if they do so only superficially it doesn’t take a lot of imagination to see how this adds up to considerable resistance. What’s worse is that even if you assume that part would work, there’s still this little problem with plastic sliding on plastic. Ironically the friction here is too insignificant to ensure that the connectors actually smoothly roll on the ridges of the hoses, and when they don’t, they just scrub along. After a while both the connectors and the tubes will get dull and show scratch marks. That much is certain.

What makes this so sad is that the passenger pods on the merry-go-round are actually quite neat they nicely illustrate that if the set wasn’t betrayed by its shoddy cheat mechanics it could have been something great. The shark is particularly nice and if you replace the foothold piece for the figures with a tile you could re-use it in many scenarios once separated from its mounting plate. It would even fit into the Dolphins Rescue Mission (41378) as a shark circling the ship wreck just as it might fit e.g. as decoration on the Pirates Theme Park Rollercoaster (31084). The highlight here is of course the little 1 x 1 modified hinge plate in Dark Blue, a new and thus still relatively rare and expensive re-color of this element. 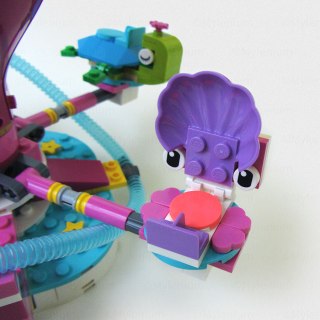 The clam shell isn’t nearly as complex, but for what it is supposed to represent sufficient plus you get another load of the Bright Pink 1 x 1 heart tile.

On first sight the crab looked a bit weird to me until I realized what this was actually supposed to represent. Aside from the way too short “legs”, which really are only stumps, I guess the failure is the lollipops/ paddles not being in Yellow plus there being no claws. In a way this makes the whole thing look more like a bug. 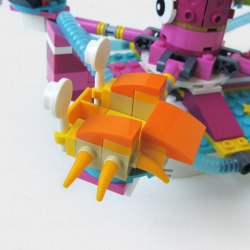 The turtle is basically just another variant of the one in the Turtles Rescue Station (41376) and the poly bag variant mentioned in the article or for that matter even the Elves one. 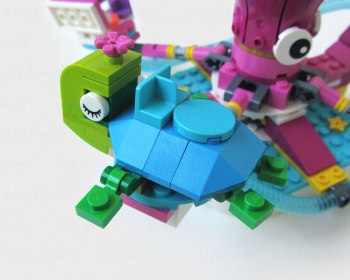 Depending on how you interpret it, the basic ingredients are always the same as is the building style and whether one’s shell is Dark Azure and the other’s Reddish Brown ultimately makes little difference. in the end it’s probably down to there only being so many ways to skin a cat, i.e. building this model, if you want it to be at a specific size. Similar to the shark here at least another re-color of that little round hinge in regular Green making this worthwhile. A small complaint would have to be that they easily could have included angled 1 x 2 wedges (29119, 29120) to represent the flippers, given that they already have the 1 x 1 modified plates with the clip in Bright Green in place. This would not have interfered with the rest of the model and made it so much more “realistic”

Stranger in a strange Land 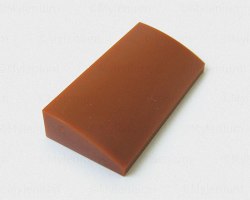 In yet another anecdote of LEGO‘s quality going down the drain these days, this time I actually had a completely wrong piece in my set, meaning an utter fluke that doesn’t even remotely resemble any item that the set actually uses. The part in question is a 2 x 4 curved slope part in Dark Orange from the Deep Space Rocket and Launch Control (60228) set in the City line of products where it is used on the large central booster sections.

The irony here is that this single piece gives me so many ideas, I almost wish they had mixed up an entire bag that contains all the eight slopes used in that other set. If you look at it long enough, you just can see how this would make a perfect padding for an ocre-ish colored leather sofa or padded seating bench in a restaurant, bus or train. With this yet again being a new re-color of this part for the first time exclusive to the set you can see how this would be valuable to a guy like me who’s always thinking about the next possible project.

and what was the part it was actually supposed to be? Of all things a Dark Bluish Grey 4 x 4 round plate used on the socket of the octopus mantle! See how neither the shape nor the color relate to one another? Those sorting cameras at the LEGO factory really must have had a bad day. Anyway, thankfully I had a few of those pieces in my stockpile and in fact the color doesn’t even matter because the parts are mostly invisible and any of them would do, but if I hadn’t, I couldn’t have finished the model that evening. It’s one thing if some small 1 x 1 tile is missing that you can add on later, but it’s a different thing when a critical structural part is missing from a bag.

No Fun in the Fun Park

While I’m certainly not a fan of entertainment parks and fun fairs, I can get behind the concept as a technical and artistic challenge in the LEGO world. In fact I have been tinkering with such mechanisms on and off and if I ever finish them, one day some pretty awesome contraptions might come of it. Yupp, it sounds like self-indulgent  boasting, but at the very least it’s going to be better than this. A lot (presumably). It shouldn’t be too much of a challenge to surpass the hacky cheat mechanics, if you allow me to put it that way.

Overall I don’t know how to sum up all my frustrations with this particular set. It’s neither a good example for overall design and aesthetics nor for engineering. It just falls short of even the lowest expectations and is for all intents and purposes quite terrible. Unless you have a specific use case like myself for scalping the parts and/ or are willing to put in some major work to improve the details, you are not doing your kids or yourself any favors. I paid 25 Euro during an Amazon flash sale for this, but at the end of the day this feels too much for such an awful set. Paying the full 40 Euro would be totally crazy.

I didn’t want to look at this abomination for much longer and couldn’t disassemble the set fast enough to salvage the components while they still were pristine. That’s how bad it is. Clearly the mess with the missing/ wrong part did nothing to improve my mood, either. The only things that gave me some joy are the little pod creatures, but that’s just not enough, unfortunately.