As someone not particularly into Harry Potter it surprises even myself how many of the respective LEGO sets I have bought lately, so here we go again with another one that ties right into The Goblet of Fire and the Trimagic Tournament. Specifically it’s themed around those short few moments when the contestants from other schools arrive, so we get Beauxbatons’ Carriage: Arrival at Hogwarts (75958) to represent the eponymous French school of magic and sorcery.

As a non-fan I don’t put too much emphasis on all the details and my buying decision is merely driven by whether I like the overall appearance of a model and/ or how I may re-use the parts later. In those regards the set ticks a few points on the list with lots of pieces in useful colors and the overall design of the carriage being a nice generic baroque-ish coach. 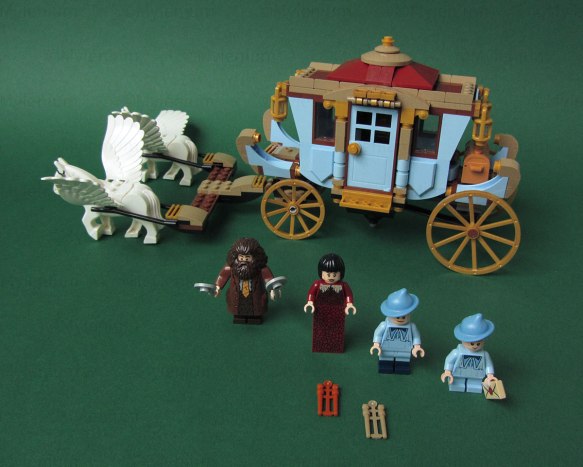 The most noteworthy part about the figures is perhaps Hagrid which is not contained in too many sets. Of course there’s also Madame Maxime and two of her students, though the latter is a bit like that old Stormtrooper problem in Star Wars – you never have enough of them and some versions of them are extremely rare. In order to re-create the actual scene from the movie you’d need a lot more Beauxbatons.

Before we move on, let me get the most disappointing thing about this set out of the way – the horses. For the life of it I can’t fathom what madness drove LEGO to include thirty years old horses in such an otherwise beautiful and elegant set. This completely ruins the overall impression. Not only are the horses kinda child-ish looking and blocky, but compared to the carriage they look like ponies and not like the mighty steeds you see in the film. It’s really ridiculous.

Creating a dedicated new mold may sound a tall order, but given that LEGO sometimes come out with new animal molds where and when you least expect them, this idea doesn’t seem as far-fetched as it may sound. One can only wonder why they didn’t do it. In fact looking through Bricklink I’m almost inclined to think that this would have been a wonderful opportunity to dust off those old Belville molds, give them a work-over and use those horses.

The second, but much less bothersome caveat is that the carriage is more a generic one that would fit the European Baroque and Renaissance eras instead of being in any way representative of what’s actually in the movie. Of course a fair argument would have to be that this could be a more than valid interpretation strictly based on the books and that’s just fine. However, where the film is concerned it doesn’t capture the “flying palace” feel that the carriage evokes in the few shots where it can actually be seen. You know, not unlike with the Tardis from Dr. Who – larger on the inside than on the outside. 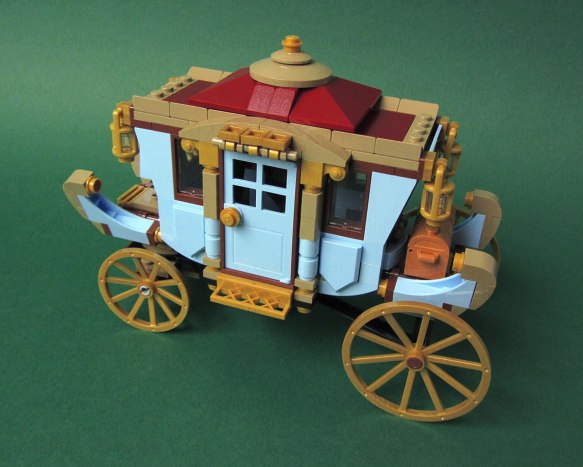 The failure to communicate the actual “bigness” can mostly be attributed to the window arrangement. A quite conventional layout was chosen as opposed to the large tiled windows on the film prop that lead you to think this is more built like a tall (factory) hall with huge, multi-storied windows. Doing so would of course also have necessitated a larger chassis as well, so aside from the specific issue with the horses this also seems to me like they were trying to keep it at a specific smaller scale to also not have to worry about things like larger wheels and the pieces count reaching a level that would make it too expensive. All sensible measures, just not in line with what you get to see on screen. 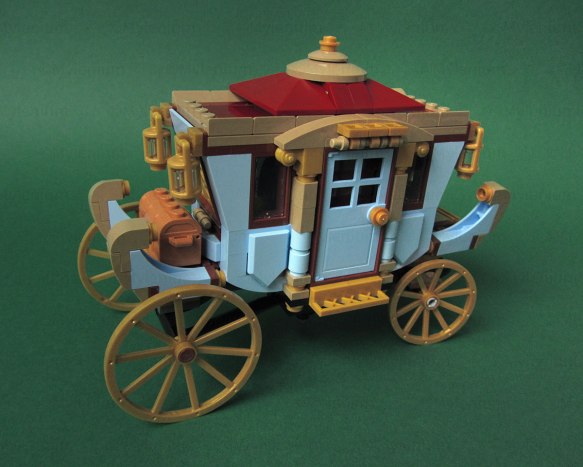 All that said, the model is still pretty gorgeous once you move on and ignore all those issues. Due to our history of Germany once having been a patchwork of smaller countries and regions and the kings, counts and earls trying to outdo each other, there are a lot of these pomp-laden, mostly decorative and representative carriages still to be found in museums and I’ve seen quite a few of them. It’s all lots of gold on black or white accentuated with gem stones and other colors, including lots of red velvet for the seating to represent royalty.

I’ve not yet seen a specific one in light blue (that would likely have been more of a Prussian mail coach or something like that), but it’s not impossible that something like that may have existed. In that regard if you are into this sort of thing the model would be more than an adequate representation. Conversely it may be more than fitting as a basic design for English, French or Italian carriages of certain historic eras. The details would differ and there would be a lot of specific customization and decoration, but overall this is so good you may just want to download the instructions and give it a try to build from your own parts.

The build process is quite enjoyable. A lot of it is of course building the left and right walls and while there are lots of repeating steps I found it never too tedious or boring. There are some interesting building techniques as well. Not particularly challenging and extraordinary, but well executed and used where it makes the most sense. One of my concerns for instance was that the “horns” might fall of easily, but they snap into place just fine and stay there unless you handle the model too roughly. There’s no denying that some of the parts require some extra care, though. The lamps and some of the other golden elements can easily be whacked out of alignment and need to be placed properly to look “nice” in the first place. 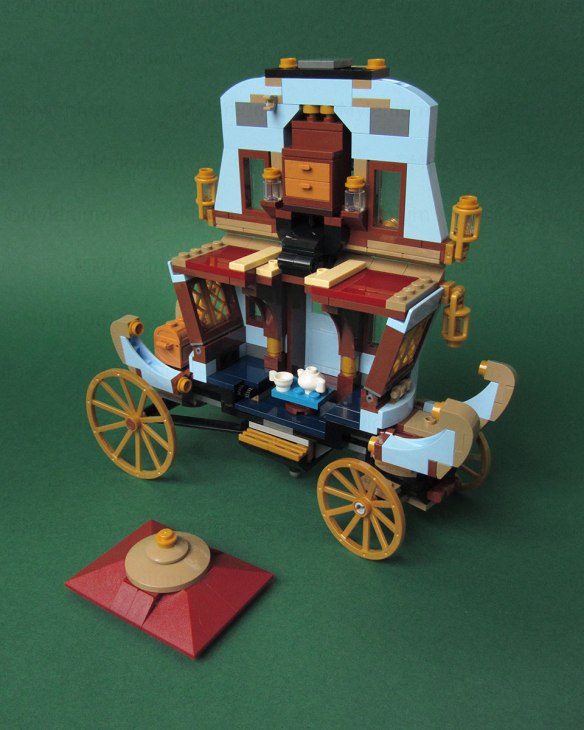 The interior is nothing to write home about, but sufficient to accommodate the three representatives of the school, i.e. Mme. Maxime and the two student girls. The idea with the entire wall lifting up deserves some accolades and they even went so far to outfit it with a cabinet. It’s crammed, but lively.

Once you dismiss the Harry Potter context and can do away with those awful horses you get a nice generalized carriage that can fit into many scenarios. However, it’s definitely not worth the 50 Euro LEGO are asking for. I may have been pulled in by the Bright Light Blue parts, many of which are available in this color for the first time in this set and I sure don’t mind getting a few nice golden and wood colored elements on top, but clearly even the 35 Euro you get this for with discounts still feels like a bit of a stretch, given the circumstances. Things would definitely look different if they had included more adequate animals, that’s for sure….

As you well know by reading this blog I regularly LEGO Friends sets. That does however not mean I’m picking them randomly and indiscriminately, so I do not necessarily cover certain subjects. One of those is all that horse stuff, which most of the time is simply contained in sets that just don’t interest me. I therefore welcome every opportunity to catch up on this using other means on my modest budget and lo and behold – this year we are getting a horse special for the summer.

The issue has been out for several weeks already as I’m writing this, but Blue Ocean somehow decided to only release it in limited distribution, meaning my local newspaper agent was unable to obtain it through his channels. I therefore had to wait until I got a chance to pick it up when I was on the road for medical appointments in the next big city this Thursday.

Let me cut to the chase right away – a price of 4 Euro doesn’t bode well from the start and you can’t expect that much from the magazine. The actual print product therefore is pretty limited to put it kindly. The comic is pretty uninspired and drawn rather poorly. The funny thing is that it hints at this year’s boardwalk amusement park sets, but apparently at the time of planning the magazine and creating the artwork no finalized designs were available, so they made up their own stuff. As a result it lacks all the details that would make the comic rich and vivid and feels rather meh.

The magazine comes with the usual mix of posters plus a few games and on one page even features a cutout horse stable. Unfortunately unlike in past years they didn’t bother to print it on thicker card stock nor did they make it a double-sided print or at least a consistent solid color for the backside. Instead you are supposed to glue it onto stronger colored paper yourself. Less than ideal and really not great for a special issue.

Of course the main reason for me were the parts and within what you can expect this is actually quite nice. The black pony/ foal makes up a good chunk of the value, but the rest isn’t bad, either. It even includes one of the newer 1 x 3 on 2 x 1 jumper plate in white and overall you have a good volume of stuff, if not a huge parts count. There have definitely been less useful Friends magazine extras, so I’m happy with that.

As it is this is an okay issue and should make your kid happy for what it is. It feels a bit barebones, though, and if they keep reducing the useful stuff further while also cutting down on distribution and print numbers in upcoming years it may simply not be worth it any longer.