Today I’m going to roll two smaller sets into one review for practical reasons, both of which I bought somewhat spontaneously to sooth my nerves and pamper myself at the LEGO store in Leipzig when I was roaming the premises after an unpleasant doctor visit. That being the case and the sets therefore having been bought at full price no matter what I can at least spare you my usual ramblings on overall value vs. price.

Worst Set of the Year?

To get things out of the way, let’s start with what I basically consider the worst LEGO set of the year. Sadly, as a tie-in for The LEGO Movie 2 this should be at least some sort of fun, but  the Good Morning Sparkle Babies! (70847) is unfortunately so lackluster, you wonder why they ever bothered to bring it out.

I fully intended to buy this set for a number of reasons, but even though I didn’t expect it to be particularly elaborate or outstanding, I never would have thought it to be this underwhelming or even terrible. Point in case: It’s basically a parts and figure pack marketed as a full set where unfortunately nothing gels and the parts don’t make up for the lack of play or collector’s value. 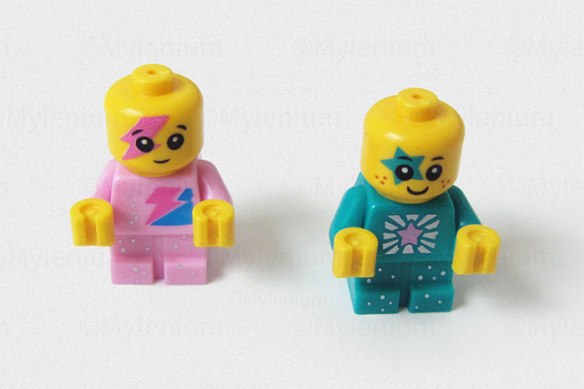 First and foremost of course I like most likely 99% of people who buy this set had my eye on the baby figures. Oddly enough, though LEGO had the mold for quite a while now, it’s seriously underused and the figures only pop up once every blue moon in a handful of sets. As you would have guessed, this makes them highly coveted items that fetch good prices on Bricklink. The two little tykes represented in this set will do nothing to improve this situation, as this is the first time we actually get Bright Pink (baby pink) and Dark Cyan (teal) bodies and a lot of people will be desperately scavenge for matching heads sans “tattoos” to integrate the babies into their City landscapes or whatever. That said, the two kids certainly are appealing and would enliven many a scenery. 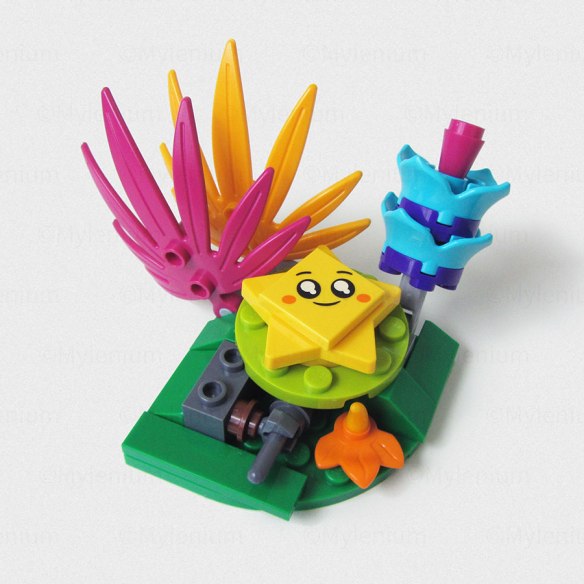 Now for the ugly part. The rest of the set is pretty much a stinker. The sad, sad irony is that each component on its own would actually be useful, in particular the plant parts in new colors. It’s just that there aren’t enough of them to do anything serious with them and to boot, they have been slapped on to some piece of island that looks like it was a lowly intern’s morning task before lunch break. I’ts just *ugh*. I get what they were aiming for, but please, could we at least have gotten a real palm/ bush with three leaves or something like that? As it is, it’s nothing more than a frustrating glimpse into a happy, colorful dream world that could have been. Imagine how awesome it actually would look to see your babies stomping around on a larger meadow surrounded by those crazy colored plants!

On a whole this is an epic fail and nothing can justify buying the set other than really having the hots for the baby figures and being crazy enough to shell out the dosh. This really just strikes me as yet another misguided attempt to quickly cash in on the movie without making any effort whatsoever. Hell, even the Emmet and Lucy minifigures are the same boring ones found in pretty much every other set of this ilk.

On to more pleasant things, the bright spot on the horizon for me on this day was the Brickheadz Lady Liberty (40367). I was actually quite surprised to find it in the LEGO store, after all, given what I overheard last time. That and the fact that the set had long been out in other countries and sold out quickly. I had little hope to be able to catch it, but sometimes there is such a thing as lucky circumstance, I guess.

Over the years I have only bought a handful of Brickheadz overall and whenever I did, it usually boiled down to getting my hands on some of the special printed tiles or rare parts in unusual colors that these sets often contained. I’ve never been much of a collector and as a matter of fact the only such figure I kept around is Thanos, which somehow tickles my “Aww, he’s cute!” senses in all his Medium Lavender glory. He’s now going to get a permanent companion with this little green lady, as she’s cute, too, and I can’t find it in my heart to dismantle her for the parts.

There’s very little that I don’t like or that I think could be improved here. The model is cleverly done and even employs the “textile folds” technique using the cut-off wedge slopes also used on the larger Statue of Liberty (21042) in the Architecture series just as it borrows the same trick with the golden hair piece for the flames. Due to these details you end up with a reasonably complex build and a model with a well-structured surface that feels weighty and voluminous and not just like a tile-covered regular box like some other Brickheadz.

As for the things I would improve: First, the crown piece clearly could have benefited from including a disc/ dish piece to cover up the center like it’s done on the bigger version. In fact this could have looked even better here, as they could have used a 4 x 4 dish which is a little less steep in curvature/ less convex and would have blended in better. The other thing I would have done is made the figure taller. I know, they are all meant to be about the same height so they form a nice even line on the shelf, but this is one case where an exception could have been made. Adding e.g. two more rows of bricks at the bottom would have allowed for more details on the robes and looked more elegant. These are minor things, though, and a true collector might have different opinions on the matter.

In any case, this is one of the few Brickheadz that genuinely should appeal to everyone, be that occasional LEGO buyers, experienced builders looking for a satisfying diversion amidst other projects or the aforementioned collectors hunting down every set in this line of products. I certainly still have warm and fuzzy feelings as little Lady Liberty is looking at me from the shelf while I’m writing this article…