Odd as it may sound, but sometimes there’s this lull where I just can’t seem to find something LEGO that would make for a nice diversion after having exhausted other options. That is of course something within my budget, given that many more expensive sets are out of reach for me, anyway. Therefore the Rocket Rally Car (31074) was kind of a filler in an order of three smaller sets. 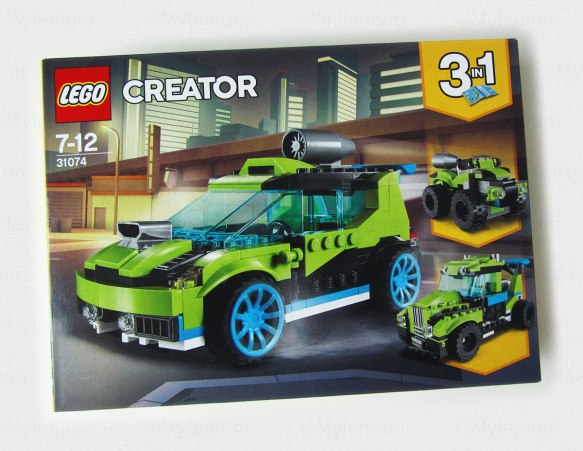 Even though in this case it wasn’t on top of my list, this doesn’t mean that I wouldn’t have bought it in the long run eventually. I have this odd thing going where I basically still want as many different parts in as many different colors as possible just in case I might ever need them for a custom build. This model has a few of them and the rest of the pieces also appeared useful, so I knew regardless of the sets own merits I’d get some value out of it.

Let me cut to the most important point right away: the color choices. Say what you will, but this is perhaps not the most attractive color scheme they could have come up with. In my view it’s some sort of bastardized Mia-themed vehicle as you would find it in the Friends series (minus the orange bits). That in itself is not necessarily a bad thing when viewed from the other side, as currently there isn’t such a vehicle in that series and this presents an easy option to expand the play value, but for a Creator 3in1 model it’s perhaps not ideal.

This can be spun in a million ways, of course, but something is off. Just like replacing the Lime Green with another color like Red would have worked, using indeed Orange in place of the Dark Azure pieces would have been an option. Personally this reminds me of photo editing work where you have accidentally inverted a single color channel and therefore the complementary colors appear.

The build turned out more elaborate than the marketing photos and other materials suggested and for me that’s always a good thing, be it just to extend the enjoyment of building by another five minutes. It’s nothing too complex or challenging, but you have to pay attention and keep track of things to not maneuver yourself into a snag. Keeping those brain cells stimulated is always a good thing in my opinion.

The set builds into a reasonably robust model and offers a good selection of movable/ playable features. The doors are built from multiple plates and hinges and are actually quite large, so access to the interior through them is easy and unlike with other models there is no need to remove the roof. In fact the set offers no specific contingencies for this, so removing the top would drag along other items and damage the model. Using the doors is way to go.

The air scoop on the front can be pushed out using a simple mechanism hidden underneath the front bumper or pulled out manually. Unfortunately it never is fully flush with the rest of the hood, so it always looks kinda odd and not aerodynamically optimized as it likely would be on the real thing. I think if I were to build this again I’d simply forego the insert and cover the hole with some parts from the spares box.

The rear comes with a fully openable trunk and in its basic form this offers a ton of stowage space. Should you decide to get this set as an ancillary model for some Friends fun, you could stuff a lot of things in there. One of the alternate uses is to tilt down the jet engine at the top and “hide” it inside, which again opens up some play scenarios like a transforming super hero/ secret agent vehicle or in more ordinary terms the engine just being tucked away for safety during transport.

Interestingly, while I’m still critical of the selection of color, the Dark Azure parts such as the spoiler wings and the spoked wheel caps are rather unique and more or less exclusive for this set. I have no idea yet what I’m going to do with them, but I’m sure they’ll be handy one day. You could likely even just hang them as decorations on a wall in a Mia-themed house indeed. 🙂

In its entirety this turned out a better experience than I had anticipated. The model comes together nicely and due to its play features would be an adequate choice for kids. It’s not worth the 20 Euro MSRP, but in most places you can get it for 15 Euro or lower and that checks out, given the size of the assembled model and perceived volume of stuff. I haven’t built the secondary models, but if I were to guess the Jeep would be quite similar structurally, just with a different outward appearance. the little quad doesn’t seem worth it at all, though, and sure wouldn’t be a reason to get this set.