Last week we had the hottest day of the year so far, and while today it’s quite the opposite with temperatures only reaching autumn levels, it still seems more than adequate to talk about a rather summer-themed set like the Surfer Van (31079) from the Creator 3in1 series..

Good news first: I got this set as a gift from my brother, so it didn’t cost me a single penny, but you can get it for around 20 Euro almost everywhere. The set had been released last year, so naturally at the point of writing this article there is no longer much of a price competition and everyone has it on some sort of discount, which can only be a good thing. This is even better since in terms of the sheer bulk of pieces you’re getting quite a bit of stuff and it seems more than a fair price. As a matter of fact similar to the Race Plane (31094) this may be one of the few occasions where even the original 30 Euro asking price might be okay. There’s a caveat, though, so read through to the end before making a decision.

The set allows you to build a reasonably large RV (recreational vehicle) or in the more generalized sense a van converted for travelling and camping as the primary model. I tried to figure out what type it is supposed to represent, but me not being a “car guy” I couldn’t pin it down. Overall it looks very American, anyway, so it’s likely not anything I would recognize. The other models didn’t interest me that much. I tend to think, though, that the little buggy could be worth a try one of these days.

The color scheme looks okay, but ultimately feels boring. It looks too much like a classic Volkswagen Bully for my taste. They should have gone for something fresher and tried something different There’s enough summer-ish, bright colors to choose from even in LEGO‘s limited palette. I tend to think a Lime Green/ Bright Green combo with an orange pin stripe could have looked pretty awesome as could have Bright Light Orange with Bright Light Blue.

On the other hand – for me as a European even those boring standard beige/ ivory (Tan) liveries with brown-ish stripes (Dark Orange etc.) that seem so popular across the pond might have been interesting at least. You get the drift – I’m just thirsty for something that tickles my art-sy brain or at least feels a bit less repetitive and mundane compared to what I get to see everyday.

Now for the problematic parts. One of the biggest issues you will be facing with this set are warping issues in the parts. The roof is particularly bad, as it consists of only a long, narrow plate onto which some slopes are attached to form the contours of the roof. This begins to bend up immediately like a springboard, being that on the underside there are no additional plates or bricks that would counter the forces on the top. No matter how much you push and press, there is always a gap somewhere.

Unfortunately the roof is not the only place where this is an issue, as in particular the left side that swings open (see further down) suffers a similar problem, if not as prominently. It’s built in part on 1 x 10 plates that expose a similar behavior. This being attached to the somewhat flimsy one plate high flat hinges also doesn’t help. Could this be fixed or avoided? Yes and no. Depending on how lucky your are, the issues could not even be noticeable. Otherwise you may be in trouble.

Point in case: After I gave the set a poor build quality rating in the customer survey, I got contacted by one of their service agents and they of course offered to replace the faulty parts. In my opinion this would be kinda pointless, as due to the specific nature of the issue you would have to replace a lot of parts and experiment around which one works best in which position. You would need to request so many parts that you bump into their internal 50 pieces limit and then the whole thing possibly won’t work out as you may still need to order more parts just to try.

Similarly, the second option of ordering different parts could be just as troublesome. Personally I’m of the opinion that one unit wide plates shouldn’t even exist in variants longer than 1 x 8 at most due to those issues, so the only “real” solution naturally would be to use shorter plates ans split the lengths covered wherever those long ones are used originally. Simple as it may sound, it wouldn’t be a straightforward replacement then, either, as of course you would still need to pay attention to get good overlap and interlocking of parts.

See what I’m getting at? To me this is a much larger overall engineering problem and I’m frankly puzzled how this could get through LEGO‘s internal review process before release. No doubt someone at least was aware of the risk. 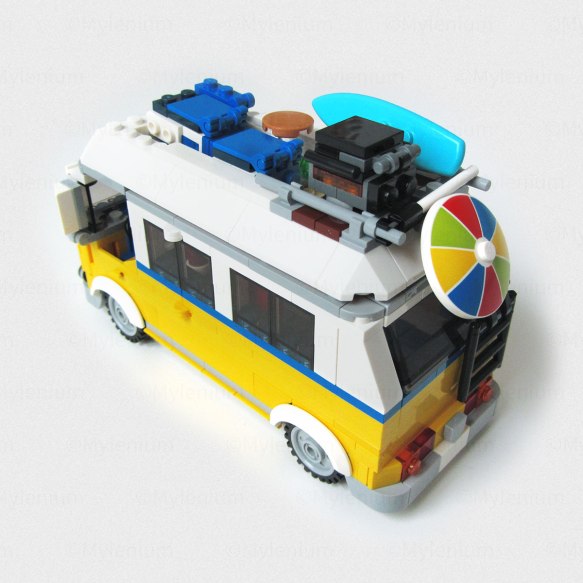 The whole matter is a bit sad, as regardless of all that you are actually getting a nice model that has been crafted with lovely details. The interior is fully decked out and could almost work in reality as well. 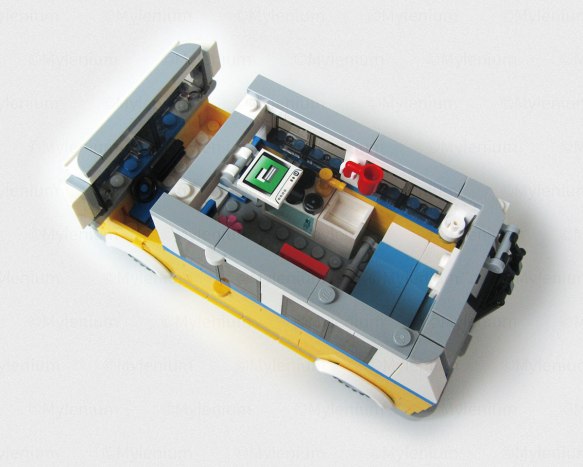 The driver’s cockpit is able to fully accommodate two minifigures (unlike many other vehicles) and also supposedly serves as the only entry port to the aft section. This is perhaps a bit unrealistic. Most such vehicles would still provide access through an extra door on the side or the rear. I also feel that it’s a bit detrimental to the layout of the cockpit as it lacks any details. Foregoing this centralized “door”, making the cockpit one or two studs longer, having the seats on turntables to swivel around and having that extra door somewhere would simply have allowed more design options.

The living and sleeping area itself is nicely done and functional as you would expect. It really makes sense, is logical and follows the standard rules of most such vehicles with the bed being a large area snuggled into the rear and a small kitchen zone while monitors and tables can be folded away. 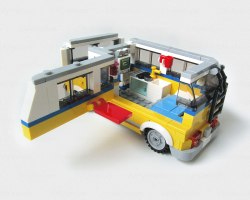 Since storage space is a premium in such vehicles every nook and cranny has to be used and so naturally the bed can be opened like a chest.

I promise I’ll stop complaining after that, but unfortunately this is one last area that we need to talk about. It’s not that I don’t get the concept and in fact as a display model where it’s just left shut this would be perfectly okay, but as a play feature the engineering is just not sufficient. As evidenced in the photos, the hinges just come off. It’s rather the norm than the exception and I actually had to fiddle around to get a photo where they open correctly while still attached to the Medium Blue tiles representing the blankets.

The obvious solution would of course be to simply attach a plate or those inverted round plates, but the caveat to that is the reduction of available space in the end only making the bed higher would genuinely fix it while keeping this play feature intact. Otherwise you probably shouldn’t give it a second thought and just leave it closed.

As a surfer van inevitably this has to have some beach accessories like chairs and an actual surf board plus a small barbecue grill. Not much to write home about, but it looks the part, giving a feeling of the vehicle being loaded to the brim when its attached and still looking okay when put up separately.

On the whole I really want to love this model, but there are quite a number of “if”s and “but”s attached that need to be considered. Fixing or improving them might prove an exercise in patience and may also require to obtain some alternate extra parts by whatever means, be that bugging LEGO‘s service with a support case to get replacements or buying them on your own dime from somewhere.

If you don’t care for those pesky details and are just looking for a playable model for your kids, then this one is pretty perfect as it gives them plenty to explore, looks reasonably realistic and is pretty robust, no matter what. kids won’t even mind if the roof comes off too easily just because it’s bent.

At any rate, this is an extreme case of “Your mileage may vary” depending on your personal priorities. My personal view remains that this is a good idea squandered by some poor design choices and while the issues are all fixable, one shouldn’t need to worry over such things on a commercial boxed model even if it’s a relatively cheap one by LEGO standards…