It’s been one of the warmest New Year’s Eves in history, so the title of this article is diametrical to the real conditions, but it is nonetheless appropriate. In the run-up to the end of year celebrations this was supposed to come out a bit earlier, but somehow it only appeared at my newsstand on Friday and I didn’t get around to finishing my review earlier. Now lets see what the LEGO Star Wars magazine has to offer on this exact first day of the new year.

The first comic takes a page from the original A New Hope movie in that it presents us with a Millenium Falcon chase through an asteroid field, however this time as part of a cosmic race, whose concept somehow immediately reminded me of Star Trek – Voyager‘s “Drive” episode in the seventh season. Someone certainly took some inspiration. It also makes the comic slightly more interesting since we at least get to see some varied spaceships and characters. 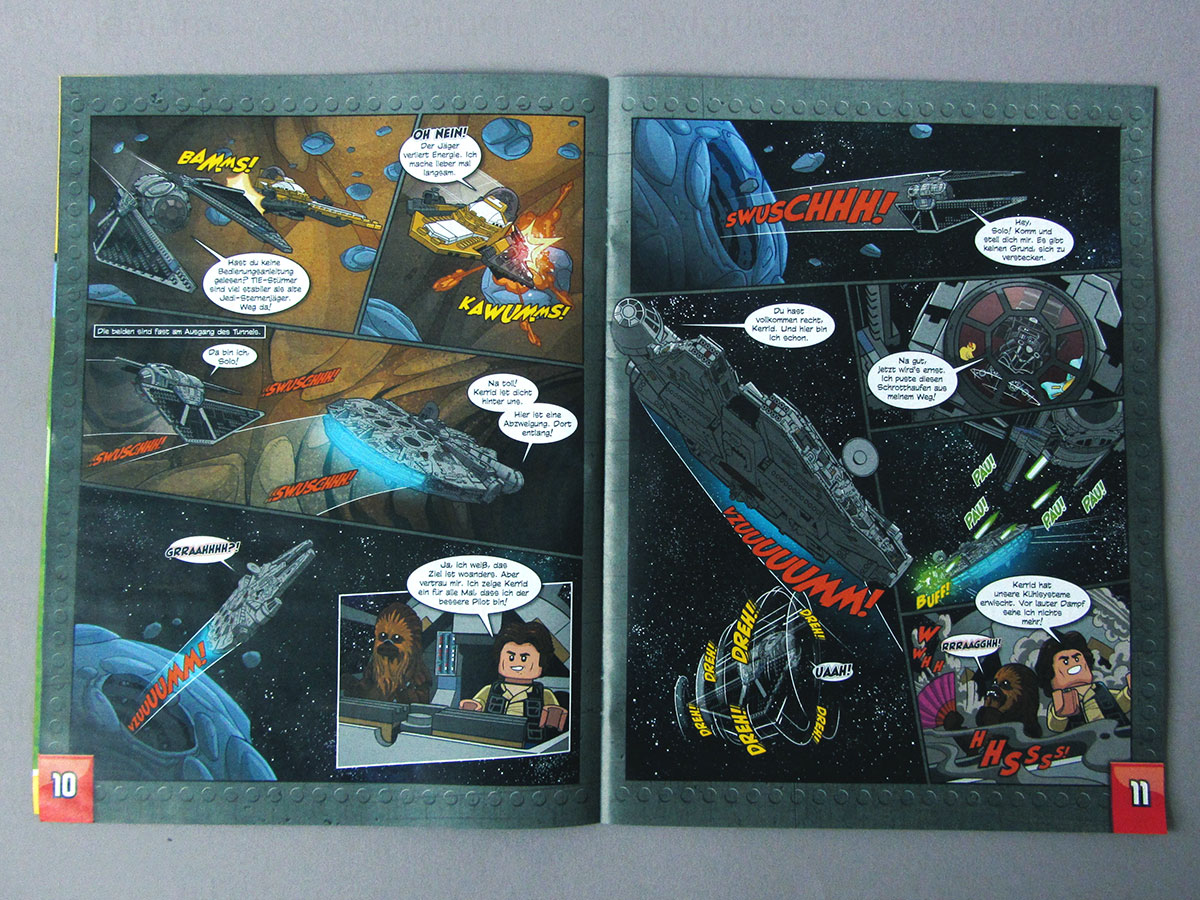 The second comic as usual serves as the means to introduce the extra and features some icy action on Hoth with some Wampas and a certain Luke Skywalker. 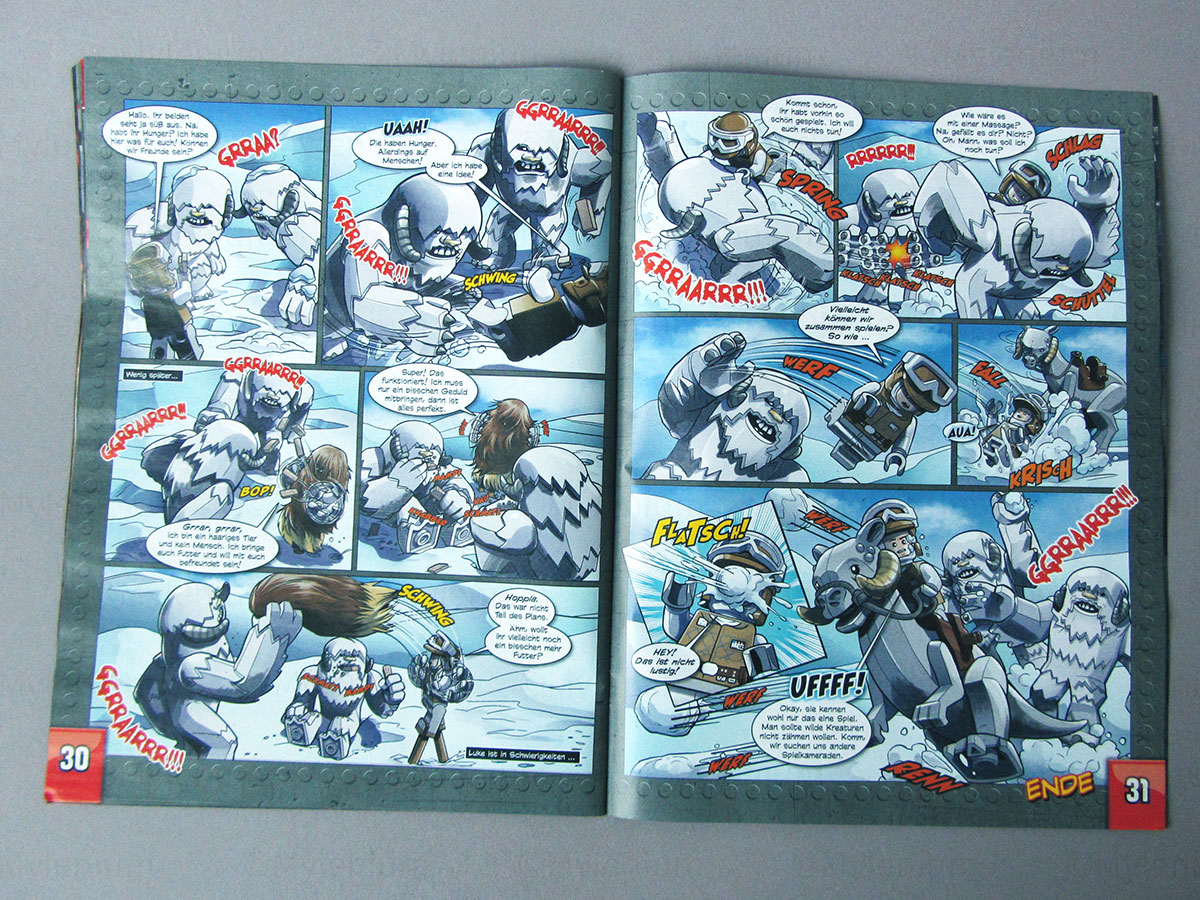 The posters are quite nice this time. One can never have enough Mustafar-themed ones as the fiery, volcanic glows just look mysterious and cool and Vader with his brooding presence adds to that. The composition feels a bit cheap and could have been done better, but it’s really okay. The back side might be even more interesting to some people. It has a close-up of Luke‘s minifigure head with the Red 5 helmet, which would make for an interesting presentation if you put it up next somewhere to the eponymous set of the helmet. 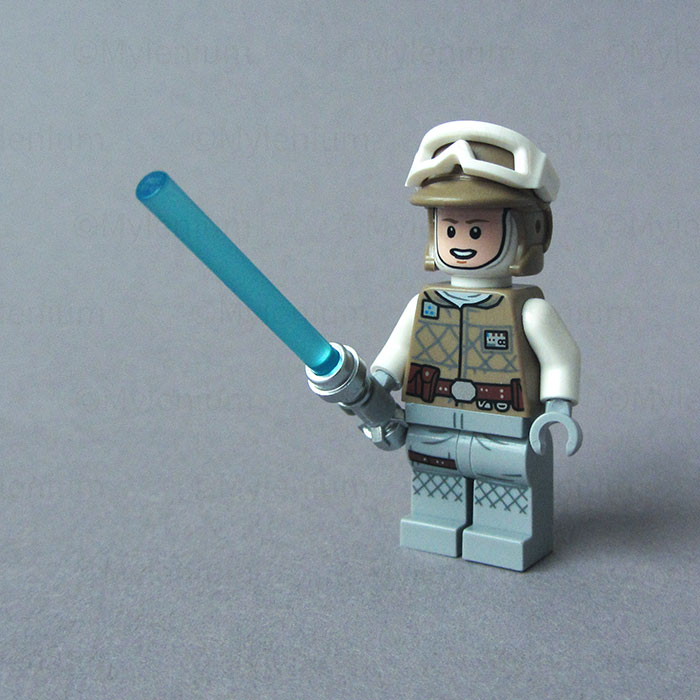 Since for all intents and purposes it’s extremely unlikely LEGO will revive the Wampa mold any time soon, you knew where this was going when I mentioned the second comic and yes, of course we’re getting the Luke minifigure instead. Regrettably, while it’s actually quite nice, it’s also nothing special. It has been available for a long time in a Microfighters set and just was part of the 2022 LEGO Star Wars Advent Calendar (75340). Chances that you already have it therefore are very high and the minifig as such will drop considerably in value. Therefore its real value is more in using it as a basis for a custom figure with a replaced head.

This edition of the mag on the whole is okay, but unless you really don’t have the minifigure and want it badly, there’s no need to rush to the newsstand. That might be a much more appropriate course of action next month, when we will get a much rarer Bo Katan fig.

As a science fiction fan of sorts and a nerd with a general interest in exotic scientific subjects like quantum physics, astral dynamics and so on of course I love myself some space-y stuff even in LEGO form. This month’s issue of the LEGO City magazine caters just for that.

The content is derived from the current space exploration theme. Unfortunately for my taste it’s a bit too simplified with many large and specific parts and kind of crude looking models, so my interest in buying some of those sets is a bit limited to say the least. That’s why I’m all the more pleased to get some of the stuff that is contained in those sets on the cheap, in a manner of speaking, by ways of the mag.

Most notably that covers the new 2019 geode-type piece, i.e. a rock with a crystalline transparent mineral inside. I have to say it really looks nice and interesting when the light refracts through the sharp edges and facets when the rock is backlit. The magazine comes with the Dark Orange and Trans Light Blue version with some other combinations being found only in the commercial sets for the time being. The second piece of mention is the printed 1×1 round tile for the robot face which due to its generic look should find some creative uses.

The minifigure is just the generic astronaut and unlike the cover image may make you think, it neither comes with a special face or an alternate hair piece so you could present it with the helmet off. It’s adequate for basic play scenarios, but not much more than that. Similarly the comics and games this time around can’t disguise that they are more of a marketing pitch for the new sets than really deep content. Therefore the real value of this issue will genuinely depend on whether you are into any of this space stuff and can overlook the shortcomings or are a regular buyer, anyway.

In case you haven’t noticed yet, I’m a bit of a Sci-Fi nerd, which as a fan of not just Star Trek almost inevitably means that you also turn into a bit of a geek on astronomy, cosmology, quantum physics and other obscure stuff average people may not care about. That’s why I was both a bit excited and skeptical at the same time about the November issue of the LEGO Friends magazine. Sadly, it didn’t fail to disappoint. The whole mag is a story of a missed opportunity to bring some education to the masses. 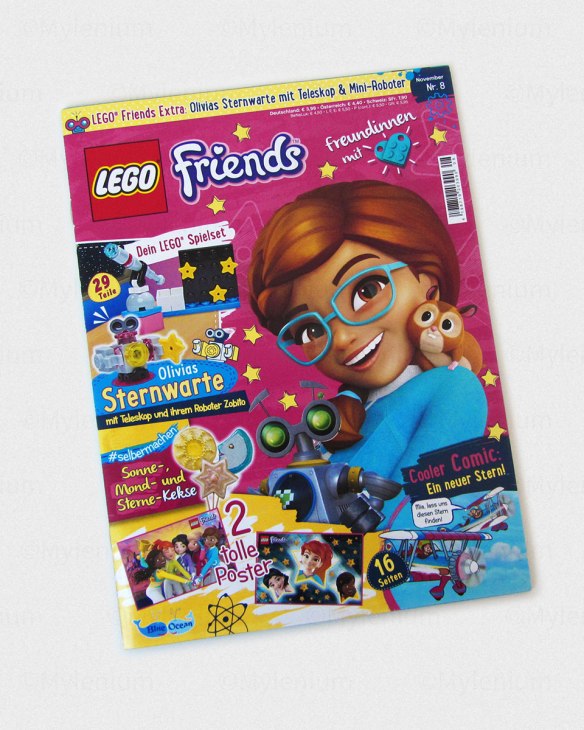 The model parts, grandiosely called Olivia’s Observatory, aren’t really that great. It’s like they couldn’t decide what to include and then settled for a minimum solution that seems to cover all bases. I feel the answer to doing it a lot better would have been to either

You could then have explained how the telescope works or encouraged the kids to re-create the stellar formations and try to find them in the sky.

This would have meant they would have had to include some kind of poster and instructions for that stuff, and this unfortunately isn’t the case at all, so the mag fails a second time. In fact there is barely any mention of this astronomy stuff except for a few simple games on two pages. Instead we get the umpteenth variation on those terrible posters with those awful CG girl faces that nobody really likes.

Overall this is a pretty bad issue and unless your little ones really insist on their monthly dose of the comics you can simply skip it this time.